Susan Boyle's dream of starring in her favourite stage musical 'Les Miserables' may become a reality, with the 'I Dreamed A Dream' singer being lined up to perform in a 25th anniversary show. 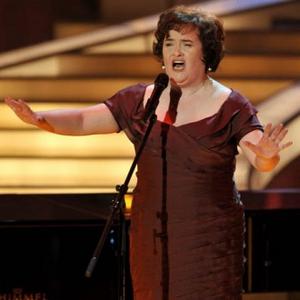 The Scottish singer - who shot to fame after performing a version of 'I Dreamed A Dream' from the musical when auditioning for Simon Cowell's show 'Britain's Got Talent' - is being lined-up to star in a 25th anniversary version of the production.

The 49-year-old star went to see a touring performance of the show in Edinburgh last week and her team are said to be in talks with boss Cameron Mackintosh so Susan can appear as the character Fantine, and perform her signature song.

A source told The Sun newspaper: "The tenth anniversary of the show was released as a video and CD. They are keen to do the same for the quarter century."

Other ambitious projects for Susan include singing with a US hip-hop artist for her second album and the possibility of duetting with 'Telephone' singer Lady GaGa.

The Catholic Church also wants Susan to sing for Pope Benedict XVI when he visits the UK later this year.