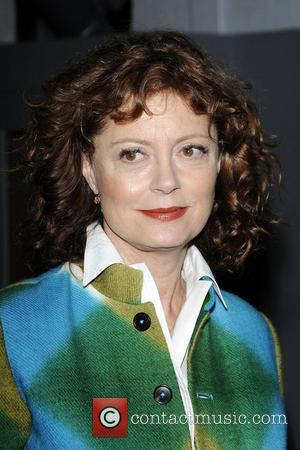 Hindu leaders have thrown their support behind outraged Catholics and taken aim at actress Susan Sarandon for remarks she made about the Pope.
Sarandon branded His Holiness Pope Benedict Xvi a "Nazi" during a film festival interview in New York state at the weekend (15Oct11), prompting an angry response from officials at America's Catholic League for Religious and Civil Rights.
And now the Hindus have joined the chorus of disapproval - suggesting the outspoken actress should apologise for defaming a religious leader.
U.S. Hindu statesman Rajan Zed tells WENN, "The comment was unnecessary, unacceptable and uncalled for.
"As a Unicef Goodwill Ambassador, Sarandon should be spreading love and not making hateful comments about the biggest religious leader of the world.
"The Pope is reportedly organising a religious peace summit in Assisi on October 27, inviting leaders of other Christian denominations, various world religions and some figures from the world of culture and science to walk along the path of dialogue and fraternity. Sarandon should be commending the Pope for this peace summit."
Meanwhile, campaigners from the Anti-Defamation League (Adl) are also piling the pressure on Sarandon to apologise for her off-hand remark.
A statement from Adl National Director Abraham H. Foxman reads, "We hope that Susan Sarandon will have the good sense to apologise to the Catholic community and all those she may have offended with this disturbing, deeply offensive and completely uncalled for attack on the good name of Pope Benedict Xvi.
"Ms. Sarandon may have her differences with the Catholic Church, but that is no excuse for throwing around Nazi analogies. Such words are hateful, vindictive and only serve to diminish the true history and meaning of the Holocaust."