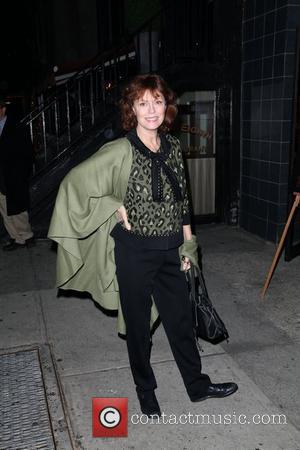 Susan Sarandon has defended Glee bosses after they were criticised for using a controversial term for transvestites in their recent ROCKY HORROR tribute - insisting certain gay rights groups are "way out of control."
The actress starred in 1975's The Rocky Horror Picture Show, the big screen remake of the stage musical, which was rebooted for a special episode of the hit U.S. TV series last month (Oct10).
However, the episode's success was marred by Gay & Lesbian Alliance Against Defamation (GLAAD) officials, who slammed the show's use of the word 'tranny' to describe cross-dressing character Dr. Frank-N-Furter.
But Sarandon is adamant the group's views on political correctness are becoming too extreme - likening them to animal-rights crusaders People for the Ethical Treatment of Animals (PETA).
When quizzed about the controversy by the New York Daily News, she replied, "What should they (Glee) have said? (GLAAD is) getting like PETA - way out of control."
GLAAD spokesman Richard Ferraro has hit back at the star, explaining, "The word 'tranny' has become an easy punch line in popular culture and many still don't realise that using the term is hurtful, dehumanising and associated with violence."