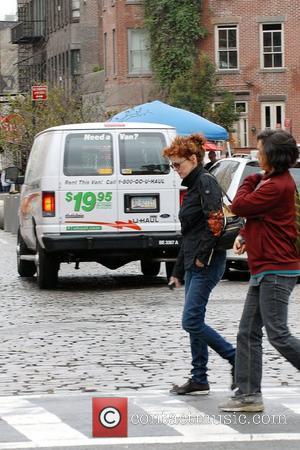 Picture: Susan Sarandon crossing the street as she leaves Pastis at Meatpacking District after having lunch with a friend New York City, USA - 10.10.09

Susan Sarandon was so relaxed about her actress daughter stripping off for a role in raunchy TV drama CALIFORNICATION, she actually encouraged her to take the part.
Eva Amurri, Sarandon's daughter with Italian director Franco Amurri, played Jackie, a woman who studied during the day and worked as a stripper by night, on a recent episode of David Duchovny's hit TV series.
And Sarandon insists she had no qualms about the 24 year old getting naked onscreen because she knew Amurri would enjoy herself.
Speaking before the show aired in the U.S. on Sunday (11Oct09), she told the New York Daily News, "I think if she were playing something that was going to be really hard for her psychologically or damaging, I'd be more concerned, but she had a really good time with the sex thing.
"She plays a woman who, as far as I can tell, is really in charge of her life and is not a victim. So it sounded to me like it would be a blast. I've already seen little bits and pieces of some of the nudity and she looks beautiful."