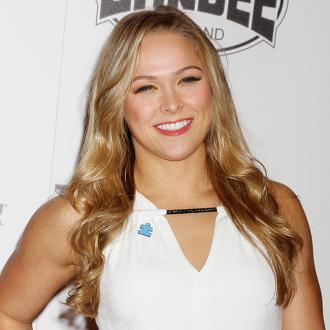 The veteran actor-and-producer has added the female grappler - who is the reigning UFC Women's Bantamweight Champion - to the cast of the action franchise, along with fellow MMA fighter Victor Ortiz.

The movie will mark the 26-year-old judo expert's acting debut, following in the footsteps of fellow MMA star-turned-actress, Gina Carano.

Carano made her name in the cage-fighting circuit before landing the lead role in Steven Soderbergh's 'Haywire', which was a critical hit in 2012. She also starred alongside Vin Diesel and Dwayne 'The Rock' Johnson earlier this year in summer blockbuster, 'Fast & Furious 6'.

Rousey will fit right into the rough-and-tumble cast as she boasts an impressive undefeated streak in MMA; the feisty blonde has won all seven of her big fights with a deadly arm-breaker submission maneuver.

Meanwhile, 'Twilight' actor Kellan Lutz is reportedly being considered for a role in the flick, also, which would add some youth to the line-up of ageing action legends including Stallone, Jean-Claude Van Damme, Bruce Willis, Arnold Schwarzenegger, Chuck Norris and Dolph Lundgren.