Sylvester Stallone and Arnold Schwarzenegger inspired each other

Sylvester Stallone insists his big screen rivalry with fellow action man Arnold Schwarzenegger in the 1980s gave him the motivation to work even harder. 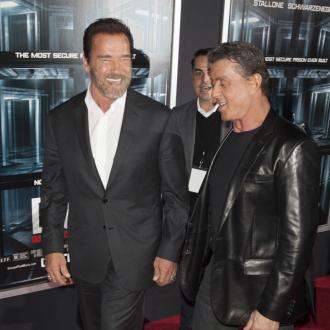 Sylvester Stallone says he and Arnold Schwarzenegger ''hated each other in a good way'' at the height of their Hollywood rivalry.

The actors were the biggest action stars of the 80s and each appeared in a string of blockbusters, with Schwarzenegger taking the lead in the 'Terminator' franchise, 'Predator' and 'Commando' and Stallone in the 'Rocky' and 'Rambo' movies.

Stallone insists their rivalry pushed each man to make bigger and better films and was a key part of their success.

He said: ''We just basically hated each other, but in a good way. It's like Muhammad Ali, you want to look for an adversary that makes you get up in the morning and give it all and leave nothing on the table. If the director says we need to do an extra three hours and it's a 15-hour day you go, 'OK, if it's going to turn out better than his.' We both agree it's sensational, otherwise you don't push as hard. It's like two soccer rivals.''

Stallone, 67, and Schwarzenegger, 66, have become good friends in recent years, as well as co-stars in 'The Expendables' movies and sharing top billing in 'Escape Plan'.

Stallone is very proud of 'The Expendables' franchise because it has given veteran action stars another shot on the big screen and the chance to appear with modern day heroes like Jason Statham and Jet Li.

Speaking at 'An Evening with Sylvester Stallone' at the London Palladium on Saturday (11.01.13), Sylvester said: ''Your career has a shelf-life and this genre is pretty much done but I was watching musical revivals where you have ... five, six or seven actors so if one bombs you've got the other five to cover for him. I thought I could do this with actors who haven't done their own films for a while. I started thinking this is going to work really good ... I thought there's strength in numbers, the audience may not want to see you alone but they definitely want to see 10 guys.''