'The Expendables 2' Sued Over Wrongful Death Of Stuntman 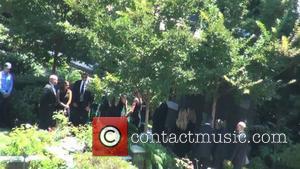 The family of a stuntman killed while working on 'The Expendables 2', has sued producers Nu Image and Millennium films for wrongful death. In the lawsuit filed on Thursday (July 26, 2012) in Los Angeles Superior Court, Zong Yu Liu and Tan Mei Bai, the parents of Kun Lun, claim the studio and second unit director Chad Stahelski are responsible for the unsafe conditions during a boating sequence according to the Hollywood Reporter.

Kun Kiu, a Chinese stuntman, was killed in an explosion in Bulgaria on October 27, 2011, during the making of the action sequel. Kiu's parents claim the defendants, "recklessly organized, planned, set up, produced, directed, trained, coordinated and otherwise prepared for and implemented the stunt which involved the use of explosives and other similar ultra-hazardous activities in the rubber boat so as to cause an explosion, thereby injuring [Liu] and causing his death". The stunt took place on the Ogynyanovo Reservoir/Dam in the town of Elin Pelin. Neither actor and writer Sylvester Stallone, director Simon West, or any other star actors in the movie are named as defendants in the suit. 'The Expendables 2' is set to be released by Lionsgate in the U.S on August 17, 2012.