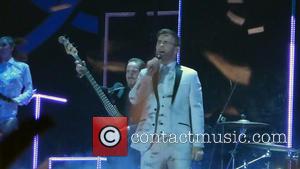 Take That star Gary Barlow is in secret talks to score the soundtrack to a new film about bespectacled English ski jumper Eddie 'the Eagle' Edwards, according to multiple reports.

The pop star, who has composed music for films like Stardust and the upcoming spy thriller Kingsman: The Secret Service, is keen to take on the soundtrack for the biopic about the unlikely 1988 Winter Olympics hero.

Filmmaker Matthew Vaughn, who worked with Barlow on both Stardust and Kingsman, is reportedly all for the idea.

A source tells The Sun newspaper, "Gary loves the Eddie the Eagle story... It's the first time he would have written an entire soundtrack, so it's an exciting project to be involved in."