Having broken the hearts of millions when Robbie Williams quit in 1995, Take That have had first hand experience of carrying on life as a four-piece group. 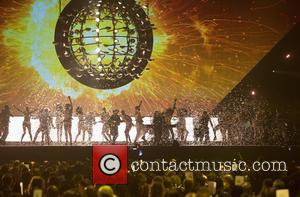 Take That have offered some boy band-to-boy band advice to One Direction about how to carry on the aftermath of Zayn Malik’s departure, having been in the same situation themselves once upon a time.

Mark Owen was speaking to British radio station Magic FM when he was asked about the similarity of the two situations, and replied “Do you know what, one thing that we never did when Rob left us the first time is we never... You get caught up in your world and you forget sometimes... hopefully somebody's phoned Zayn and made sure he's alright, because it's, you know, it's difficult.” The parallels of the groups’ respective career arcs are striking. Both groups started out with five members for the first half-decade of their chart dominance. Twenty years ago in 1995, Robbie Williams left Take That to pursue a solo career. And in 2015, a whole new generation of teenage superfans experienced heartbreak when Malik announced in March that he was leaving 1D due to stress.

More: Take That announce new single ‘Let In The Sun’ ahead of Brit Awards show

Malik has not made any suggestions so far that he’s preparing a solo career, though it seems inconceivable that he won’t strike out on his own eventually. There’s also not been any suggestion of ill feeling, as the 22 year old said at the time “I know I have four friends for life in Louis, Liam, Harry and Niall. I know they will continue to be the best band in the world.”

Following Williams’ departure, Take That battled on for another seven months before splitting up for the first time in 1996. Following a well-received reunion as a four-piece in 2005, Williams briefly rejoined before departing once more. In 2014, Jason Orange also announced that he was quitting the group, leaving Take That as a three-piece for the time being.

Take That’s leader Gary Barlow added: “I agree with Mark, I think it's sometimes, it's always hard for the one that leaves, so hopefully they are all in touch. I'm sure he's got good people around him anyway.”

Fans will be hoping that a 1D split isn’t in the offing, as the likes of ‘NSYNC’s Lance Bass and documentary maker Morgan Spurlock have speculated that Harry Styles might be the next out of the door. Encouragingly for them, Liam Payne tweeted in early April that the group had been planning a new album.

More: So what does Stephen Hawking think about Zayn Malik leaving One Direction?