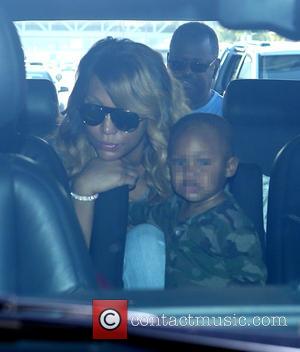 R&B singer Tamar Braxton broke down in tears on U.S. Tv on Thursday (30Oct14) after opening up about the lengths she goes to to hide her debilitating skin condition vitiligo.

Toni Braxton's younger sister first opened up about her struggles with the pigment issue, which turned Michael Jackson's skin colour from black to white, in 2012, but she has rarely spoken publicly about her changing complexion since.

She became emotional as she talked about her battle to keep her condition hidden during a discussion about emotional baggage on her daytime talk show The Real on Thursday, when she revealed she covers her hands in make-up to even out her patchy skin tone.

Fighting back tears, she explained, "The reason why I work with a whole bunch of make-up artists is because I don't want other people to see, to know about it. I used to sit on my hands, because it's really bad on my hands. And it's so funny that people think I bleach my skin, because bleaching won't take away my pigment (condition)... (But) I tan to try to hide it..."

Braxton, who was wearing a white blouse, then revealed another reason behind her tears after an old associate made a throwaway comment about her lightened skin colour just moments before cameras began rolling on the show.

She revealed, "I was just backstage, just today, and that's why I'm so emotional... Somebody I hadn't seen in a while was like, 'Oh my God, I was thinking who is that white woman over there in the white? Oh, it's Tamar'."

However, Braxton insists she has learned to be comfortable with her condition, adding, "I find myself always defending the fact that I am who I am and so, for me, I just decided, 'You know what Tamar, you're going to accept yourself for who you are...' I'm gonna be me."

Braxton wasn't the only celebrity co-host to get emotional during the chat - her fellow panel member Tamera Mowry-Housley also wiped away tears after admitting she has always felt insecure about her looks because she was constantly considered the "cute, goofy" sibling when compared to her "sexy, sassy" identical twin sister Tia.

The Sister, Sister star said, "I always thought it was a negative term, because all I wanted to be was sexy. I didn't just wanna be cute. So now, to this day, when people say, 'Oh, you're so cute', there's a part of me goes like, 'Argh, I'm 36 years old, I'm a grown woman', and I have to own that I can be sexy. Honestly, I wake up every single day and I question that."