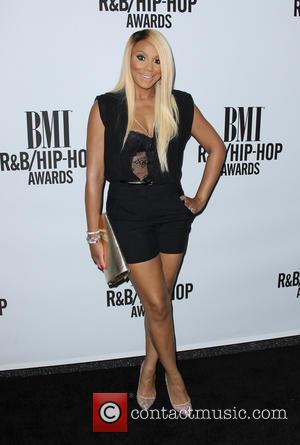 R&B singer and reality Tv star Tamar Braxton has taken aim at critics for poking fun at her thinning locks after suffering from the affects of postpartum hair loss.

The Love & War hitmaker, who gave birth to her first child, son Logan, last summer (13), revealed her hair struggles during a recent episode of her U.S. reality show Braxton Family Values, during which she decided to remove her trademark blonde wig for the cameras to display her natural look.

Her receding hairline prompted some detractors to make light of her lack of tresses, but Toni Braxton's younger sister has since taken to Instagram.com to address the cruel criticism.

She shared a photo of herself taken at a 2013 red carpet event while she was still pregnant, and explained, "When u Have your baby... (my son) your hair falls out!!"

The 37 year old, who is married to record executive Vincent Herbert, then credited the use of a special beauty oil to help her hair grow back and insisted the hair loss wasn't a big deal.

She added, "Thanks to @simplicityhairoil for my hairline coming back! But if it didn't work I would Buy me some. Glad you all get to see the changes while (Braxton Family Values) & (her other reality show Tamar & Vince) on T.V. (sic)".