'You make me happy/I'm always happy/With you'. 'Something is better than nothing/It's gonna be alright'. Nobody is going to accuse Tashaki Miyaki of taking too much time over their lyrics, that's for sure. And yet the vagueness of the sentiments suits their music, which is similarly hazy. This is indie-pop without sharp edges or urgency, a slightly stoned take on shoegaze which is aspires to be mildly enjoyable, and largely succeeds. 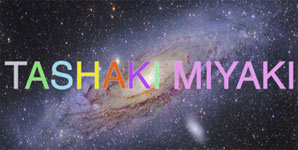 The Tashaki Miyaki EP, the group's first release, features four solidly executed songs, all of which share an aesthetic (Best Coast-meets-shoegaze, with a hint of Low, and a dash of Belly's dream-pop) and an atmosphere (relaxed, to the point of being half-asleep). The guitarist, leaning heavily on his or her effects pedal, produces a sound which is warm and fuzzy; the female singer, softly pining from within her bath of reverb, sounds rather like Beth Cosentino; the drums shuffle along unobtrusively. The vocal melodies are consistently strong, which is important because music this relaxed can stand or fall according to the quality of those melodies; if they aren't up to scratch, the results can sound awfully inconsequential.

Are Tashaki Miyaki a band worth investing in, emotionally and financially? At the risk of lapsing into terrible 'If you like x, you'll like this' territory, that really depends on your stance regarding washed-out, dreamy indie-pop music. This is promising, but strictly second-tier stuff, and if you're a shoegaze agnostic it won't win you over. Genre enthusiasts will, however, find plenty to like. Personally, I'm tempted to reserve judgement entirely until they release their first full length; at that point we should know whether they're capable of building on this solid starting point and developing their sound in interesting ways.