Taylor Momsen is dating Paul Weller's son Natt, and has already been introduced to his family and friends. 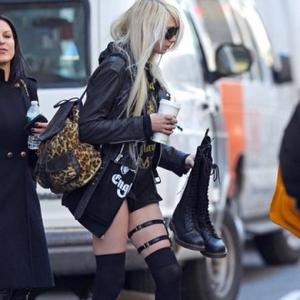 The Pretty Reckless singer and Natt Weller - who first met in October - were spotted backstage at the Wireless Festival in London's Hyde Park together on Sunday (03.07.11) following her band's performance.

A source said: "They're well-matched given their joint love of black eyeliner."

Natt - whose mother is Paul's ex-wife Dee C. Lee - took to his twitter page to praise his new girlfriend's band during and after their set.

He wrote: "Watching @taylormomsen wireless she's killing it her vocal is Bang On !! (sic)"

Revealing he had been dining with Kelly Osborne and Sadie Frost, he later added: "At dinner w @MissKellyO @Sadieliza so fun ! X

"And @taylormomsen the pretty reckless killed it at wireless today! (sic)"

The fledgling romance is said to be going well and 23-year-old Natt has even introduced Taylor, 17, to his rock star father Paul - whose hits include 'The Changingman', 'Broken Stones' and 'Wild Wood'.

An insider told the Daily Mirror newspaper: "Natt has taken Taylor to Paul's home to meet his family and friends. They all had a big dinner together."

Though it is not known when the meeting took place, Taylor posted a picture on her twitter page of her watching Paul perform at the Hard Rock Calling festival in Hyde Park from the stage last week.

However, she incorrectly captioned the picture, writing: "Watching Paul Weller at Wireless."