Could Taylor Swift have what it takes to topple Mumford & Sons from the top of the US albums chart, with her new album Red? Of all of this week’s releases, Taylor looks the likely candidate to upset the current chart positions. Taylor has become headline news over the last few years. As she has gradually traversed the boundary from country to pop – and even sneaks in a spot of dubstep in this latest full-length outing – she appears to be welcomed with arms as open at the Grand ol’ Opry as they are at the annual MTV Awards parties. 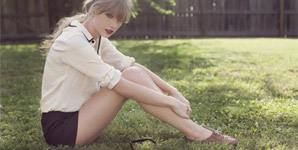 The major label debut from Kendrick Lamar has already been hailed as one of the most significant hip-hop albums of the year. Good Kid, m.A.A.d. City was leaked online last week, ahead of its official US release today. A review from the UK’s NME magazine remarked that he may have lost some of his edge since releasing his 2011 mixtape, but the 25 year old from Compton certainly hasn’t forgotten his roots. With the success of single ‘Swimming Pools’ already under his belt, Good Kid… looks set to be a huge hit for Lamar.

A strong contender from across the pond comes in the form of Bat For Lashes, from the UK. Natasha Khan has been causing a bit of a stir with the cover to her latest album The Haunted Man, as she’s not wearing much in the way of clothing. Well, she’s not really wearing anything in the way of clothing. Discussion of her high-class Kate Bush-esque songs should soon eclipse the chatter about her nudity though. Her last album, 2009’s Two Suns was a huge success in her homeland, though it only reached 141 in the US album charts. Could The Haunted Man be the album that Natasha needs to break America?

Billie Ray Cyrus clearly isn’t content to sit back and watch whilst his daughter, Miley Cyrus, gets all of the celebrity attention. Billy Ray is back and whilst some of you might have him down as a bit of a one-hit wonder (who doesn’t remember ‘Achy Breaky Heart’…?), his albums are regular entrants into the Top 30 US country charts. Today, he releases his 13th studio album, Change My Mind, on Blue Cadillac Music. He probably won’t match the widespread appeal of his daughter Miley but there’s still an audience for Billy Ray Cyrus; there’s more to this man than just one achy breaky heart.