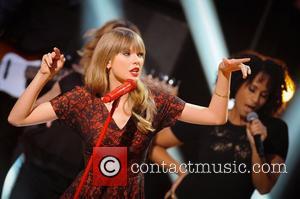 Taylor Swift’s latest album Red has remained steadfast at the top of the Billboard albums chart for a second week. Swift’s popularity appears to know no bounds, as she has made a successful and seamless transition from her country roots into the pop arena. She seems equally at home at the Grand Ole Opry as she does wooing a crowd of teenagers at an MTV Awards event. This dual appeal has translated nicely into CD sales for Swift, who shifted 344,000 copies of Red in the last week in the United States.

The rapper Meek Mill made a seriously impressive dent in the chars with his major label debut, Dreams and Nightmares, and sold approximately 165,000, according to MTV News (sourced from Nielsen Soundscan). It may be a long way off Swift’s total, but it still landed him the number two slot, in a week where sales were affected by Hurricane Sandy on the East Coast of America. The previous week, it had been another rapper snapping at Taylor’s heels (albeit from a distance!). This week, Kendrick Lamar has slipped down to number five with good kid, m.A.A.d. City, making room for Rod Stewart’s Christmas album Merry Christmas Baby.

Mumford & Sons, who impressed with their initial ascent to the top of the US charts with Babel, have dropped to number seven with sales of 44,000. We’re predicting a third week at the top for Taylor; this week’s releases seem to contain little in the way of a threat to the 23 year-old global star.