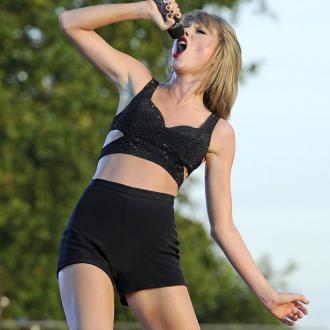 The 25-year-old singer was performing at Nationals Park in Washington, D.C - as part of her '1989' World Tour - when she found herself stuck on an extendable stage which had suddenly stopped working.

Addressing the crowd, Taylor said:''They just told me in my ear that I might be stuck up here forever. This thing is broken.

''I was just thinking about how I was singing a song about rain and it rained today...it's not that funny...We're just gonna have to re-choreograph the entire show. It's fine. Whatever. It's gonna be a unique show D.C.!''

However, ever the consummate professional, Taylor laughed off the awkward situation and carried on performing.

Addressing the crowd, the 'Shake It Off' singer said: ''I'll just be here forever. Stuck up here, unless I choose to jump down. But in the meantime, I'm gonna sing a song for you called 'Clean' and I hope you'll sing along.''

Moments before Taylor got stuck, she had just finished performing 'Royals' with her special guest star for the evening, Lorde.

The '22' hitmaker has been bringing a whole host of her celebrity friends onstage with her during her '1989' tour, including singer Nick Jonas and models Cara Delevingne and Gigi Hadid.