Taylor Swift's mother honoured the star with a heartfelt tribute as she presented her daughter with the Milestone Award at the Academy of Country Music Awards at the AT&T Stadium in Arlington, Texas, last night (19.04.15). 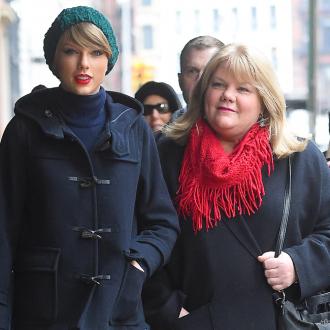 Taylor Swift's mother honoured her with a heartfelt tribute as she presented her with the Milestone Award at the Academy of Country Music Awards last night (19.04.15).

The 25-year-old singer's mother, Andrea Finlay - who was recently diagnosed with cancer - took to the stage to introduce the blonde beauty at the AT&T Stadium in Arlington, Texas, and gushed over the star's achievements.

She said: ''I've watched this milestone artist from the time she was a tangled hair little girl growing up on our farm, full of imagination and creativity. And ever since then, her favourite thing in the world to do has been to write a song, tell a story, play a guitar, or a piano. And I've seen those things carry her through every emotion, every experience in her life. Good or bad.

''I'd like to thank the ACMs for honouring her in this way. But I'd also like to thank the entire music community for taking such good care of her. And [to] the fans, I know you love her as I love her, And for that I thank you eternally.

After Taylor made her way on stage, the teary pair were seen hugging before the 'Black Space' hitmaker went on to personally thank her fans for accepting her transition from country music to pop in her latest album '1989'.

She said: ''You truly see who a person is when you give them news that they weren't expecting. And so, to the country community, when I told you that I'd made a pop album and that I wanted to go explore other genres, you showed me who you are with the grace that you accepted that with.''

Other winners at the ceremony, which was hosted by Blake Shelton and Luke Bryan, included Blake's wife Miranda Lambert, who took home the Female Vocalist of the Year, Album of the Year and Song of the Year Awards.

The full Academy of Country Music Awards 2015 winners list is as follows:

Entertainer Of The Year:

Female Vocalist Of The Year:

Male Vocalist Of The Year:

Song Of The Year

New Artist of the Year:

Vocal Duo Of The Year:

Vocal Group Of The Year:

Single Record Of The Year: