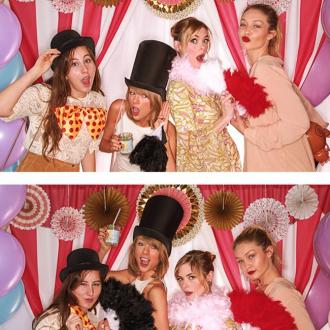 The 'Blank Space' hitmaker took time out from performing in Philadelphia over the weekend to return to Los Angeles to celebrate with her actress friend, who is expecting her second child with husband Kyle Newman.

Taylor - who will be Godmother to the unborn tot - shared a number of images from a photo booth from the party on Instagram, writing on one picture of herself, the expectant mother and pals Gigi Hadid and Alana Haim: ''Baby shower/ major throwdown for @jaime_king feat @gigihadid @babyhaim (sic)''

Jaime wrote on Instagram after the shower: ''How can I put this into words? @taylorswift is not only going to be an exquisite Godmother but one of the best friends one could ask for. Thank you Tay for throwing me such an insanely beautiful baby shower. Less then 12 hours after performing for 100k strong. I love you SO MUCH. (sic)''

The 36-year-old actress - who already has 20-month-old son James - previously admitted she thinks Taylor will be a ''perfect'' godmother.

She said: ''I always knew she was going to be the godmother if I had another baby. Choosing a godmother is a very sacred and important thing in our family. They're going to be guiding your child, and they're responsible for them if something was to ever happen. We try and choose people who we know would raise our child the way that we would raise our child and her thoughtfulness, her kindness, her authenticity . . . is so powerful to me. She's so uninhibited in her giving . . . It's just beyond.''