Taylor Swift will release her new album, 'Red', on October 22, 2012, which will feature a collaboration with 'Lego House' hitmaker Ed Sheeran. 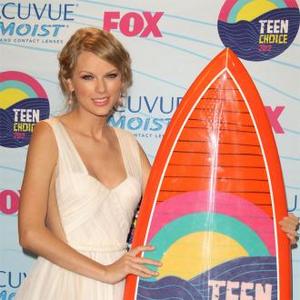 The 22-year-old singer/songwriter revealed the news during a live web chat with fans on Monday evening (13.08.12) in which she previewed her new single, 'We Are Never Ever Getting Back Together', and told how her new record will include a collaboration with 'Lego House' hitmaker Ed Sheeran.

She said: ''Ed and I wrote a song while sitting on a trampoline that was so much fun and we loved so much that we actually ended up recording it as a duet.''

Taylor's forthcoming album - her first since 2010's 'Speak Now' - will feature 16 tracks, a number of which are inspired by her own past relationships and have been co-written.

She added: '''Speak Now', I wrote it completely on my own and I didn't have any co-writers and you know, that was an amazing way to make a record and I was really proud of it.

''But when it came to approaching this album I really wanted to go back to the drawing board and think about a different way to approach it.''

The blonde beauty's forthcoming single contains lyrics which could suggest the song is about ex-boyfriend John Mayer, particularly when she sings, ''You hide away and find your piece of mind with some indie record that's much cooler than mine.''

While Taylor has not released an album for two years, she recently teamed up with B.O.B. on hit single 'Both of Us' and contributed two songs for the official 'Hunger Games' soundtrack, 'Eyes Open' and 'Safe and Sound'.