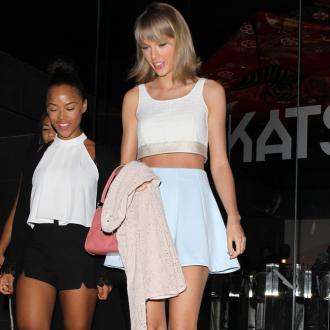 The 25-year-old singer-songwriter is well-known for performing on stage alongside her famous friends, such as 'Girls' creator Lena Dunham and Gigi Hadid, and she's now welcomed two of Hollywood's biggest stars into the team.

Sir Patrick, 75, tweeted: ''So @IanMcKellen recited Bad Blood and I did Blank Space on @NPRAskMeAnother. May we join the squad, @taylorswift13?''

And without hesitation, Taylor replied: ''Absolutely.''

The American star - who's currently dating Scottish DJ Calvin Harris - then tweeted a montage of the acclaimed actors and wrote: ''Thanks for reciting my lyrics, @IanMcKellen and @SirPatStew! You've made my day.

The blonde beauty has been joined on stage by a whole host of celebrities during her 'Taylor Swift: The 1989 World Tour' in recent months including tennis star Serena Williams, 'Law and Order: Special Victims Unit' actress Mariska Hargitay - whose character Taylor named one of her cats after - 'Keeping Up With the Kardashians' star Kendall Jenner and model-turned-actress Cara Delevingne.