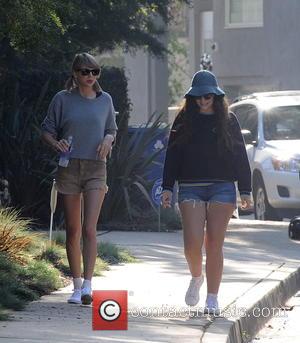 Taylor Swift and Miley Cyrus were among the guests at Clive Davis' annual pre-Grammy Awards party where a moment of silence was held in honour of Whitney Houston's daughter.

The music mogul's bash at the Beverly Hilton hotel in Los Angeles on Saturday (07Feb15) was tinged with sadness following the hospitalisation of Bobbi Kristina Brown, who was found unresponsive in a bath tub at her home in Georgia eight days ago.

Brown's mother, superstar singer Houston, drowned in a bath tub at the same hotel on the night of Davis' party in 2012, and guests at the 2015 event were urged to keep the 21 year old in their thoughts.

Davis was introduced by basketball legend Magic Johnson, who took time out from his speech to ask the audience to remember Brown, saying, "If we can, let's have 30 seconds of silence for (Houston's) daughter, who is in the hospital. We want to make sure she is Ok and that she can recover from her accident."

Performers at the glitzy bash included Pharrell Williams, actor/musician Jamie Foxx, Mary J. Blige and Sam Smith, who opened the show with a cover of My Funny Valentine and then went on to sing his smash hit Stay With Me.

Rapper Iggy Azalea performed her hit Black Widow with Rita Ora before joining Jennifer Hudson for a rendition of their new collaboration, Trouble, while Meghan Trainor sang with John Legend.

The evening ended with a tribute to the Bee Gees, just hours after the only surviving member of the band, Barry Gibb, picked up a Grammys' Lifetime Achievement prize on behalf of the trio.

Davis' annual bash is held on the eve of the Grammy Awards, which are handed out at a ceremony in Los Angeles on Sunday (08Feb15).