Review of Themes For Dying Earth Album by Teen Daze

Angry times seem to have brought angrier music. The world we all share has in the last few years  become a turbulent vessel, the fate of which worryingly rests in the hands of men who care little for anything other than reinforcing a desire to exercise their will over others. There are two sides to every story of course, with one person's activist being another's tree hugger, but this deepening polarisation is reflected in non-mainstream music (Pop simply isn't built for the purpose), be it the angry invective of Sleaford Mods or the rattling, mad hatter punk of Bristolians Idles. Driven to polemics by almost daily acts of the ridiculous from people supposed to know better, for many song writers angry has become an artistic byword.

Jamison Isaak - most usually known by his forename or more widely under his handle Teen Daze - is on the face of it an unlikely recruit to the pantheon of whipcrack radicals. Following three previous releases consisting mostly of hazy chillwave, a fourth, 2015's Morning After, edged closer towards the indie gloss of DiiV, his motivation being the rediscovery of a love for late sixties psychedelia. Touring the album however proved to be a less than happy experience, the producer returning home to Vancouver afterward having suffered the effects of a breakdown.

Recuperating at his parent's house built at the foot of a mountain range, the extended contemplation time brought about a profound new concern for the planet and worry about the far reaching implications for us all of climate change. Themes For Dying Earth's premise isn't strictly environmental - languid opener Cycle deal with Jamison's depression and anxiety - but the subject is one in which he's become deeply invested in, if not in an overtly indoctrinating way.

A gentleness of heart and mind creates a number of juxtapositions. The listener would be forgiven for expecting from the title that the experience here would be harrowing and confrontational, but for the most part, the reverse is true. Only on Dream City and the cropped Becoming are the coldness and starker overtones of man's carelessness really apparent; the prevailing mood is one of veiled brightness, of the simplistic tones of nature's benign and taken for granted processes. With a little imagination for instance it's possible to hear the photosynthesis on Cherry Blossoms' steepling ambience, or the neo-rustic, Milky Way C&W of Anew.

Rightly or wrongly, the message is at no stage allowed to dominate the musical host, such that even at it's most obvious on Rising, the worry that global warming may eventually drown what we now take for granted is couched in a song that wouldn't have sounded too amiss on Christopher Cross' louche, AOR benchmark debut.

This then is the main conceit with calling your record something as provocative as Themes From A Dying Earth, the sort of calculated risk that brings the sceptical to your front porch and the committed looking for a rallying cry. In the end the carrier proves too slight for the message, a lack of restlessness and narrative making it hard to empathise with Jamison's doubtless worthy causes. Angry may a new aphrodisiac, but in a zero sum world, substance will always count for more than the politics of being nice. 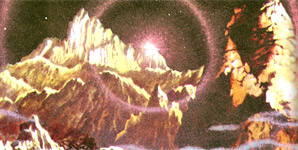