Rob Wilkins, who was Pratchett’s long-time assistant and now manages his estate, tweeted a picture of the hard drive in front of a six-and-a-half tonne Lord Jericho steamroller and wrote he was about to ‘fulfill my obligation to Terry’.

Then half-an-hour later Wilkes shared an image of the crushed hard drive with the caption: ‘There goes the browsing history... Many thanks to @steamfair. Soon to be on display at @SalisburyMuseum in September’.

The destroyed hard drive will be displayed at the Terry Pratchett: His World exhibition at the Salisbury museum between 16 September and 13 January 2018.

There goes the browsing history... Many thanks to @steamfair. Soon to be on display at @SalisburyMuseum in September https://t.co/Di8tvTO4Hi pic.twitter.com/onGGWLDYL4

Richard Henry, curator of Salisbury Museum, said: "The steamroller totally annihilated the stone blocks underneath but the hard drive survived better than expected so we put it in a stone crusher afterwards which I think probably finally did it in”.

Mr Henry said that Pratchett did not want his unpublished works to be completed by someone else and had wanted them destroyed.

"It's something you've got to follow, and it's really nice that they have followed his requests so specifically," he added.  "It's surprisingly difficult to find somebody to run over a hard drive with a steamroller.

"I think a few people thought we were kidding when I first started putting out feelers to see if it was possible or not."

Prachett's longtime friend, author Neil Gaiman, had previously spoken about the author's unusal request, teling The Times in 2015 that he wanted “whatever he was working on at the time of his death to be taken out along with his computers, to be put in the middle of a road and for a steamroller to steamroll over them all”. 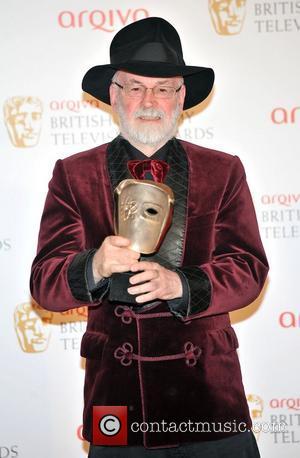