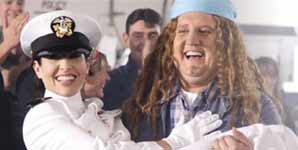 Sharleen Spiteri and Texas release their brand new single 'Sleep' on January 9th 2006. The single comes accompanied by quite simply one of the best pop videos of recent times – written, directed and co-staring the UK's very own King of Comedy, Peter Kay.

The video came about after Peter and Sharleen met at Live 8, when Peter introduced himself to her as a massive Texas fan, with an encyclopaedic knowledge of their career to boot. With Sharleen sharing the same enthusiasm for his work, a firm friendship was formed and the two decided to work together as soon as possible - so the 'Sleep' project was born. Whilst the video ideas were being bounced back between Bolton and Glasgow Peter sang 'Sweet Caroline' with Sharleen live at V2006 and the two terrorised the karaoke bars of Manchester on several occasions through the summer.

The video for 'Sleep' was shot over a weekend in Peter's home town of Bolton and sees him resurrect his old Marc Park character (first seen on That Peter Kay Thing). The video goes on to lampoon a series of well known video and film scenes such as the infamous potters wheel moment from 'Ghost', the plaster head from Lionel Ritchie's 'Hello' and, most hilariously of all, a role-reversal of 'Officer and a Gentleman' with Peter in Debra Wingers role and Sharleen dressed up as sharp-suited naval hero Richard Gere.

'Sleep' is already proving to be a firm favourite from the much acclaimed 'Red Book' album, featuring Sharleen's first ever duet on record, with Paul Buchannan from the Blue Nile.

"Sleep is one of those songs that came about by accident," says Sharleen, 'Johnny (from Texas) bumped into Paul and he mentioned that he'd love to sing with us, so Johnny & I went into the studio to write a song especially with Paul in mind. It really came to life in the studio; I love the combination of our vocal styles. It's one of my favourites on the album."

Following their recently completed sell out UK tour the band have announced further
dates for May 2006: