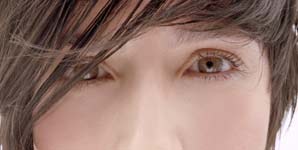 Click here to see the video to the brand new single from Texas - 'Can't Resist' - out to buy 24th October.

"The song is Texas having a fresh look at that Giorgio Moroder vibe of uplifting electronic pop but with sexy slow vocals," says Sharleen Spiteri. "I wanted to combine modern sounds with a real Billie Holliday kind of feel. When I was growing up my dad would be away at sea and my Mum, my sister and I would be at home blasting disco and Abba alongside her old Billie Holliday albums. I knew the spirit I wanted. I knew I could emulate that Billie Holliday sensibility - not the framed icon with the beautiful flower in her hair, but the slightly dark woman on the edge, this tortured brave singer who struggled around this merciless music circuit. It's a bit of a homage from my heart."

Texas fanclub members granted a recent preview listening of new album, "Red Book", voted "Can't Resist" as the best next single release by a ratio of more than 2:1. "You think that Sharleen can't stretch her voice any more and then she comes up with another great style altogether," wrote one diehard on an unofficial European fansite. The band were quick to listen, rescheduling their single releases to respond to this overwhelming fan response.

"Can't Resist" is just one of four collaborations with Brian Higgins and Xenomania that feature on "Red Book". The album also features work with the likes of producers Dallas Austin and Mike Hedges as well as with Paul Buchanan of brooding Northern musical cult The Blue Nile. Already being reviewed as a return to the heights of "White On Blonde", the album will be released the week after the "Can't Resist" single on October 31st.

The new single comes backed with two new exclusive b-sides, "Say Hello" and "Call On You". A stunning video has been shot by Sam Brown, responsible for the recent James Blunt promo that dominated music television for weeks and weeks.

Rumours that Madonna producer Stuart Price has just signed up for mix duties with Texas are true. Reports that Sharleen's personal life is a tragic drama in the classic Billie Holliday mould are very far from the truth. Texas are back for 2005 and stronger than ever.