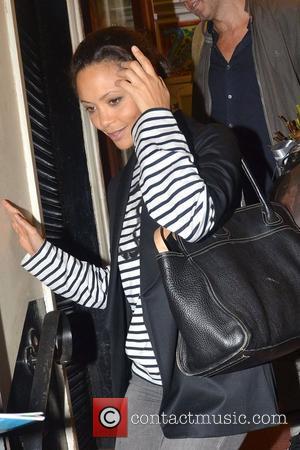 Picture: Thandie Newton leaving the Comedy theatre after her first night performance in 'Death and the Maiden'. London, England - 13.10.11

Actress Thandie Newton has hit out at Hollywood's casting couch culture, revealing she was targeted by "gross" directors trying to "exploit" her naivety.
The English actress broke into the mainstream with her role in 1994 movie Interview with the Vampire: The Vampire Chronicles and went on to find international fame the following year with her role in Jefferson In Paris.
Now she's revealed she was twice targeted by sleazy producers in the early days of her career, claiming one director made footage "literally shooting up my skirt" and a photographer forced her to pose for snaps while bending over a desk and wearing a leather miniskirt.
And when she accidentally met the same snapper earlier this year (11) she was tempted to confront him over the incident - but decided to leave it unsaid because he was with his family.
Newton tells Stella magazine, "I had this real eruption of emotion. I didn't because his kids were there, but I wanted to say, 'Shame on you'... It's a minority of people who want to exploit you in the creative world, but if you want to be opportunistic in that way, it's brilliant."