The Airborne Toxic Event (formed 2006) The Airborne Toxic Event, who got their name from Don DeLillo's book White Noise, are an American indie rock band from Los Angeles. The lineup of the band consists of Mikel Jollett on vocals and guitar, Steven Chen on keyboards, Daren Taylor on drums, Anna Bulbrook on viola and bass player Noah Harmon.

Formation: The band formed in 2006 when Mikel Jollett's novel writing took an unexpected turn and he found himself writing songs instead of prose. Jollett had recently discovered that his mother had been diagnosed with cancer as well as being diagnosed himself with genetic Autoimmune disease.

That summer, Jollett met Daren Taylor and the pair immediately hit it off. They began working together as a two-piece before asking Anna Bulbrook and Noah Harmon to join the band. Steven Chen joined later, as he had met Jollett several years previously, when they had both lived in San Francisco.

Prior to starting the band, Jollett worked as a freelance journalist, contributing to publications such as Los Angeles Times, Filter Magazine and Men's Health. Since the band's incarnation, though, he has continued to write only fiction and has had a short story published in a collection alongside a story by Stephen King.

Progress: The Airborne Toxic Event's debut show was in Echo Park. They went on to play a large number of shows in the Los Angeles area. In December 2006, they were listed in Rolling Stone's 'Top 25 Bands On MySpace' feature.

After this, the band was featured in a number of online music blogs as well as local press such as L.A. Weekly. Following in the footsteps of Silversun Pickups and Cold War Kids, The Airborne Toxic Event was named one of the bands to watch in 2008 by Los Angeles Times.

Despite being unsigned, the song 'Sometime Around Midnight' was added to the regular rotation playlists on radio stations such as KROQ, Indie 103 and 987FM. Eventually, the band signed a deal with Majordomo Records in April 2008. In August that year, the band released their debut album.

The band's self-titled album received a highly critical review from the Pitchfork website, which gave the album 1.6 out of 10. The review accused the band of taking the worst elements of bands such as Bright Eyes and Arcade Fire and The Strokes.

The Airborne Toxic Event have appeared on a number of TV shows, such as Last Call with Carson Daly, The Late Show with David Letterman and Late Night with Conan O'Brien.

The band has toured extensively to promote the album, supporting the likes of Kaiser Chiefs, The Fratellis and Ima Robot.

The Airborne Toxic Event, All At Once Album Review

By Laura Johnstone in Music Reviews on 17 May 2011

A second album for the American band appears to have come easily. Yet another selection of strong and passionate tracks prove that since that big hit of 'Something Around Midnight', The Airborne Toxic Event have continued to grow. 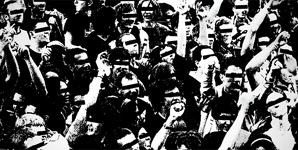 Continue reading: The Airborne Toxic Event, All At Once Album Review

19:30 on a Monday night and queuing for a beer I can't help but notice that every other poster is actually a sign saying 'The Airborne Toxic Event on at 20:30'. This seems to be the norm nowadays around Nottingham, the unpredictable time that is. This show starts early and then the next night the main act might not be on until gone 11:00, this is pure madness. What's more concerning is knowing that such an early stage time for the headline band, they might end up playing to a half empty room. But after walking into the room that plays host to The Airborne Toxic Event, I turn straight into a wall, not an actual brick wall but a wall that is the crowd, a pleasant surprise to see that the venue looks near full. after a 15 minute wait, the lights go low and the band appear. They are greeted to a shout from the crowed of "What time do you call this?" which on reflection maybe triggered off the mischievous mood that Mikel Jollett seemed to be in. 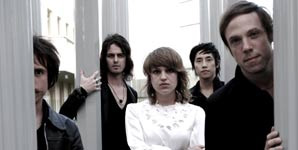 By Dom Gourlay in Music Reviews on 08 January 2009 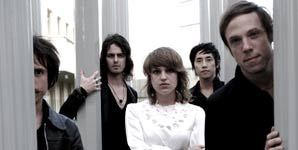 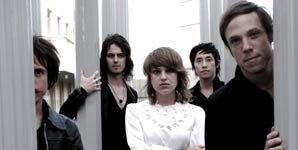 Interview with The Airborne Toxic Event. 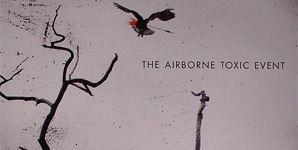 The Airborne Toxic Event - All At Once