By Andy Peterson in Music Reviews on 21 January 2013

The Avett Brothers last album, 2009's I and Love and You, was one that brought them into the mass consciousness on both sides of the Atlantic; testimony to the kind of career endurance and character which would shame most of their British counterparts. Taking their cues from legendary producer Rick Rubin, amongst the generally positive clamour of web hacks far and wide there were, however, also murmurs of formula; a lack of risks being taken and, generally, all the kind of stuff levelled at a band the moment they begin selling enough of their music to come off welfare. To their credit, the band - the eponymous brothers Scott and Seth, plus other permanent member Bob Crawford - have opted to ignore those griping about comfy environs and have chosen on The Carpenter to decree that if any approach isn't broken, there's no cotton pickin' reason to fix it. 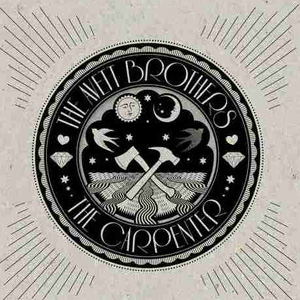 Rubin is also in the chair again, but this time the boys claim wielding far less of a pervasive influence. What transpires is a record that is prepared to make few compromises on the use of trad song writing nous and by extension mainstream accessibility, whilst throwing the odd surprise up in its largely folk/country milieu. Probably the biggest of these arrives in the form of Paul Newman & The Demons, as dirtier, check shirted rawk stomp as you feel they could muster and one which their producer may well have been omnipotently nodding along to behind the mixing desk. Less claustrophobic, the fleeting Geraldine reaches out for the middle class angst demographic, seventies rock patents all running along too clever for themselves, a little like The Hold Steady covering Randy Newman.

This is all well and good, but the trio and their small army of collaborators -  RHCP drummer Chad Smith and Heartbreakers percussionist Lenny Castro to name just two - aren't really here to be ironic, and if The Carpenter feels very comfortable on, it's because they stick to archetypes that are at the roots of all dreams, American or otherwise. The (almost) titular opener reveals our central character to be a drifter, neither knowing or understanding his own best vocation and finding solace in what he might be rather than what he'll inevitably become once more. By contrast Pretty Girl From Michigan is a story of lopsided love played out over fifties sounding, sweaty blue collar rock 'n' roll whilst staying in a different character, but one just as recognisable to the touch,  Live And Die is a down home fiddle diddle and banjo toting square dance piece that's as uncomplicated as it's rustic.

The Avett Brothers - Another Is Waiting (Live on Letterman) Video