Review of Happiness Blues Album by The Candle Thieves

The Candle Thieves are a duo from Peterborough are the epitome of geek-chic. Skinny jeans and thick rimmed glasses may emphasise this image but it is their music that is a voyage into eternal bliss and a disregard for any melodramatics. After releasing their debut album Sunshine and Other Misfortunes earlier this year, their recent EP Happiness Blues follows a similar trend of contrasting the uplifting with the melancholic. However, whichever way one may see it, this is definitely an EP to listen to when you are down in the blues; reaching out a message of hope, promise and possibility. 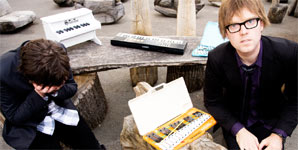 The Sunshine Song, taken from their first LP, is an inspiring and chirpy track that seeks the pleasures of youth. Like the name of the track, it creates a beam of light but also cleverly contrasts with the stark reality of life by suggesting 'You're beautiful, but you must die one day'. The song becomes even more beautiful by the accompanying piano, played by, the strangely named, 'The Glock'. Scott McEwan, who completes the duo, adds great vocals to truly capture its effervescent and bright nature.

Recent and past influences are evident here. Turning to US artists, old and new, we can see signs of bands such as the Beach Boys, Jack's Mannequin and the recently successful Owl City. Annabelle's Song is a sickly sweet piece that has an instrumental that you would expect on a Mario game (you will understand when you hear it). Whilst the sickly amiable nature of the song can get a bit tedious by the end, there is certainly nothing wrong with it. Joyfulness and adolescence is what The Candle Thieves are all about. Similarly, Balloon #2, is a whimsical ballad that is able to also combine happiness with the blues by yearning 'I see a balloon, did it see me?' Finishing off the EP perfectly, we finally realise the true definition of 'happiness blues'.

Whilst the EP is truly beautiful and has optimistic melodies, the third track Paper Aeroplanes may make some people feel short changed. With it being a transient instrumental, it does indeed reveal the charming and picturesque harmonies this duo can produce, but it can potentially come across a bit of a shame. It is a brilliantly made track; don't get me wrong, but it feels like it shouldn't have been on an EP that boasts only four tracks.

The Candle Thieves definitely know how to make an uplifting record. By juxtaposing the melancholic with signs of peace and hope; it sounds like a cliché, but this EP really does make you feel warm and fuzzy on the inside. The record also does exactly what it is supposed to do; it captures your attention and makes you curious for what they will produce next. In turn, this duo really do have the capability to burst a ray of sunshine around the world; all from a tiny village in Peterborough. 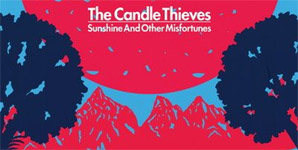 The Candle Thieves - Sunshine And Other Misfortunes The Candle Thieves - We're All Going To Die (Have Fun) Video