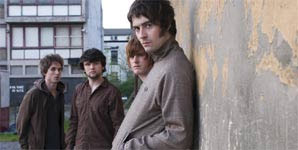 A couple of months ago The Courteeners were touring up and down the country supporting the likes of The Coral and at times it has to be said, blowing them off the stage.

There has been something of a buzz going around about these boys from Manchester. The thing about being from Manchester brings positive and negative vibes and assumptions about the band. The old 'oh they are just another Northern band trying to be Oasis'. AND yes The Courteeners have already been compared to many Northern acts from Oasis, to The Smiths and not forgetting Arctic Monkeys.

Putting all that crap behind, this band that are what you would say are a little wet behind the ears and are set to embark on their biggest tour to date, but are they really ready for it? Do they have enough material to sustain more than a supporting slot?

Although there were some good points in the show, there just wasn't enough meat around the bone to keep the crowed interested? OK they have got some good tunes such as Cavorting, Acrylic and even After Show, but other than that The Courteeners were playing some B-sides including the favourite Kimberly.

The sad thing is that The Courteeners have been rushed and pushed by the agent and thrown into the deep end, rather than just climb up the ladder steadily and get everyone on board. The Rescue Rooms seems like a big pay check to the agent, because how many band that have not even got an album out play at such venues.

Without sounding to discouraging to The Courteeners, when they played as support on that faithful night to The Coral, The Courteeners were on another level, but it was short, sweet and straight to the point. In short this band just need time to progress and grow instead of some fat cat of an agent trying to make a quick buck on them.