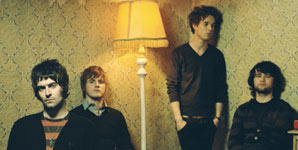 Interview with The Courteeners at Glastonbury Festival 2010

Fresh off the plane from Ibiza Rocks and feeling 'a good 12-14 years older than before the weekend' Liam Fray braves the midday sun to chat to Contactmusic.com ahead of their brilliant set on The Other stage at this year's Glastonbury Festival. He spoke about how the band's sound has changed, the new album and how he feels that famous Manchester music scene hasn't really influenced them at all. He tells us his thoughts on the line up for this year's festival and what his line up for next year would be; The Courteeners to headline The Pyramid Stage at Glastonbury 2011?! Liam Fray starts the rumour now!

CM: What number Glastonbury is it for you?
Liam Fray: Three. I think we were still unsigned when we played our first one, that was June 07, then we did 08 on the John Peel Stage and this year we play The Other Stage. It's nice, we've had a step up every time, so maybe next year we'll headline the Pyramid.that's an exclusive!

CM: So it's the 40th anniversary this year, quite a special occasion, what do you think to the event and the line up?
LF: To be honest with you, I think its f*cking great, a really good line up and I'm not the biggest U2 fan but I was really looking forward to seeing them, so I'm a bit gutted that they're not playing. Gorillaz will be good, I'm sure.

CM: So who are you really looking forward to seeing?
LF: Mystery Jets, Laura Marling, I think the Lightening Seeds will be pretty good, they're like a guilty pleasure. And if they get Baddiel and Skinner on for Three Lions, it'd really kick tomorrow off!

CM: You've got a mammoth festival season coming up.hitting all the festivals right through to November, are you still going to be alive by the end of the summer!?
LF: F*cking hell, yeah! We're used to it though, we say, 'look after yourself when you're not doing it, and when you're doing it, go for it' it should be the other way round I suppose. We smashed both Isle of White and Ibiza which is really good because the first couple are always a bit shaky and if it doesn't go well, it can really affect your mindset. God knows how many more we have, I think after this we've got T In The Park, Oxygen, V Festival, Benicassim, Summer Sonic in Japan, somewhere in Portugal. It's pretty much every weekend until the end of August and then we've got a couple in November.

CM: At least you have a couple of months to recover from the summer!
LF: Well, September's free but I think we're going to be doing a little European tour then. We've actually just done a European tour but our new album Falcon isn't out in Europe yet and we only got told that three nights into the tour. We mixed up the set lists which is good. It's obviously easier to just play songs that everybody knows, but it was good because I think the second album is a lot better than the first one. So it's kind of a flip side; do you play songs that everyone will know, or do you want to get a better account of yourself? Surely you want to play more of what you think is better?

CM: So what's the difference between the two albums? How has the sound changed?
LF: It sounds bigger. I think I just got more confident with throwing different things in, you know different parts, melodies and stuff. It's voluptuous in melody. The first one was just 'plug in and play', we plugged in and recorded, whereas this one's a lot more thought out on our behalf.

CM: Is there a certain concept or mindset behind it?
LF: Not really, the lyrics are pretty personal I suppose but they are on the first album too. They're just very close to the bone I suppose. Sometimes, I find them difficult to sing, but that makes it more exciting I think. If you find something very easy, what's the point?

CM So how do you get over that emotion?
LF: Sometimes I don't. A few times on the last tour, where it was like 'f*cking hell', but I think it's good, it means you mean it.

CM: You all grew up together in Manchester, where the music scene has influenced some huge bands. How did it influence you?
LF: You know what, I always say this, but I'm not sure that it did. Obviously you're going to be influenced by those bands and feel an affiliation with them because you all want the same thing and they probably went to the same bars as you did. But at the same time, none of it was happening when we were going out, so in my mind, The Strokes were more of an influence to me. Or the f*cking 22-20s who had one record but that was when I thought 'this is what I want to do', so those people were more of a broad influence. The Manchester scene just made you think 'f*cking hell, we can do this because they lived just down the road and that's where we went out, we can be a big band'.
But I think form when you're twelve to eighteen, that's when you first realise your love of music and who influences you. People make me laugh because they say 'oh yeah, the first album I bought was Joy Division' and I say to them 'no it wasn't mate, you were eight, it was probably the Lion King sound track!'

CM: Being from Manchester, press did their usual thing of making you fit into a certain box and you automatically got the 'lad band' label, how do you feel about that?
LF: It's very dull and boring isn't it? I know a lot of kids who would give their right arm to be a music journalist, so anyone who does do that is 'lazy' shall we say. I just say listen to the lyrics and then you'll see that we're not. We try not to take much notice of that.

CM: Your biggest celebrity fan is the great Morrissey, how was your tour with him?
LF: Amazing! I thought we'd be a lot more nervous than we were about it, but no, 'ducks to water' shall we say! He just made us feel very welcome and when someone you respect that much says, 'I like what you do, do you want to come and tour in America?' it's an honour.

CM: So have you got any interesting stories about the tour?
LF: Oh, I can't possibly tell you! (Laughs) It's more than my jobs worth!

CM: What have you got planned for your set today?
LF: We're just going to go for it, we're going to out on a really good show, and it's going to be strong songs, big choruses.

CM: All the favourites?
LF: All the big'uns, all the big hits and some newer ones. I just feel great now having two albums to choose from. It was really difficult, we just did Isle Of Wight Festival and the set was only 45 minutes and on tour we do an hour and twenty five, so to whittle it down, you have to drop six or seven songs, it's quite a difficult thing to do for us.

CM: You've obviously got a bigger back catalogue now, but there has been the argument recently that new bands with only one album under their belt are being given too higher place on the bill and can't fill the set times, what do you think about that?
LF: I don't want to say names, but yeah, I totally f*cking get that. There's bands that have only got one album out and there's no fucking way they've got the tunes we've got. But I think 'f*ck it', if people want to come and see us we'll be at The Other Stage and we'll blow them away, absolutely smash them.

CM: We look forward to it! Thanks for chatting to us!
LF: No worries, thank you.