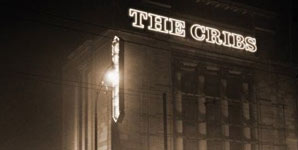 If The Strokes had come from Wakefield with a Liam Gallagher snot-punk attitude, they wouldn't be far from The Cribs, whose single Men's Needs has been single of the week all over the place (including Radio 1 and the NME). Their second album, The New Fellas, suggested that they were a lot less school disco than fellow Yorkshiremen, The Kaiser Chiefs, and sounded like a more hard-edged Franz Ferdinand.

Like The Strokes, some of the ingredients can be a bit ropey - the vocals and the guitars cross over a ragged edge more than a few times - but that actually makes this album a lot more engaging. In an age when 'indie' includes character-less bands like Razorlight or The Kooks, The Cribs are the real deal. The trio is actually three brothers Jarman, and this album was produced by Alex Kapranos of Franz Ferdinand, who has managed to retain a fantastic live sound.

MNWNW is the sound of a talented band having a thrash - the short songs never outstay their welcome, with each idea getting a fair airing. Be Safe (featuring Lee Ranaldo of Sonic Youth) is the kind of song that REM used to make when they had some bite. Excellent stuff.