Review of Ironiclast Album by The Damned Things

Taking their name from the lyrics to Ram Jam's 'Black Betty', The Damned Things are an outfit consisting of members of Anthrax, Every Time I Die and Fall Out Boy. This, their debut album, was released at the tail end of 2010 and is currently being promoted by a tour across North America. 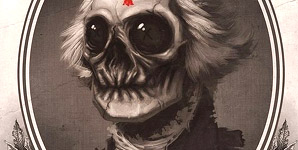 Given the catalogue of work that precedes the members of The Damned Things it would come as no surprise to find a variety of styles present on this release, but the actual results are very much of a metal/classic rock nature. Evident from the opening chords of 'Handbook For The Recently Deceased', a knack for anthems soon becomes apparent on 'Bad Blood' and the hedonistic 'Friday Night (Going Down In Flames)'. Also worthy of note is 'Little Darling', which has the kind of gang-vocal chorus that encourages fist-pumping en masse, and to the band's credit the album remains listenable throughout its ten track duration. The only slight criticisms is that at times there are numbers that blend together too closely through the lack of variety, but clearly 'Ironclast' was never expected to break new ground and in fact it more than holds its own in the rock genre.