Posted in Press Releases on 19 December 2013 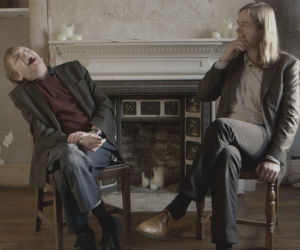 John Doran of the Quietus meets Mark E. Smith of pre-eminent rock group The Fall, in a special Christmas episode of our British Masters series where John interviews the most influential and colourful figures from British popular music history, including Gary Numan, Johnny Marr, and Dizzee Rascal.

In the episode, Smith talks to Doran about recording tracks for the film Twilight - "vampirism is a crime at the end of the day" - and declares that he'd rather The Fall soundtracked "the story of VICE" or "the life of John Doran."

Smith discusses The Fall's varying line up over the years, claiming that he just doesn't like musicians, but has now found four bandmates that he respects. He also recalls the days when Nico of The Velvet Underground lived round the corner in Salford at John Cooper Clarke's flat as his sixteen-year-old "w**k fantasy."

John Doran on The Fall:

"There are only a few things that separate us from the rest of the animal kingdom. the most important of these attributes, is an appreciation of the music of The Fall. This means if you do not listen to such albums as Hex Enduction Hour, This Nations Saving Grace and The Unutterable you are worse than savage. The solution to what ails us is clear - be less beastly, listen to The Fall"