The Game Wins $20,000 For Charity In Basketball Bet 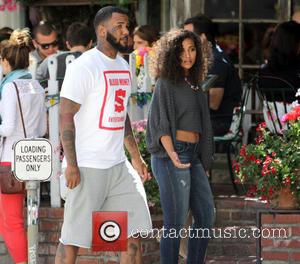 The Game has scored a $20,000 (£12,500) charity donation from basketball star Kevin Durant after the rapper successfully pulled off a three-point shot in a high stakes bet.

The Dreams hitmaker, who was offered a basketball scholarship from Washington State University, wanted to prove he still has what it takes on the court during a meet-up with a group of celebrity pals over the weekend (07-08Jun14), and he bet Durant he could score a basket from the three-point line.

The Oklahoma City Thunder ace wasn't convinced and agreed to hand over the cash to The Game's youth team, the California Frog All-Stars, and join the kids for a practise session if he could pull off the feat.

The rapper succeeded and shared video footage of his triumph with fans on Instagram.com.

In the accompanying message, he wrote, "Bet Kevin Durant a.k.a. @EasyMoneySniper $20,000 that he'd have to donate to the @froggallstars & play wit (sic) #LaFamilia in the #DrewLeague if I made an Nba 3 pointer".

The Game's feat was witnessed by fellow rapper Drake, Durant's former Thunder teammate James Harden, and Toronto Raptors guard DeMar DeRozan, who can also be seen in the video clip.