As the majority of the UK's music industry converges on Brighton like a rabid swarm of bees, it's not difficult to see why The Great Escape's annual shindig is fast becoming this nation's answer to South-By-Southwest. With its vibrant mix of conferences, seminars and live events taking place in twenty-five different venues over the course of three days, it's probably the only festival where boredom genuinely is an impossible facet to achieve. 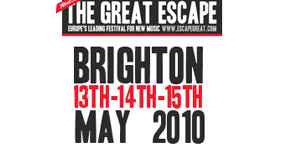 Contact arrives in the midday sun on Thursday to be told The Walkmen won't be playing due to missing their flight. Damn. However there's an industry showcase taking place in Horatio's Bar on the pier where Kid Bombardos incestuous noise and Dansette Junior's dance-infused pop both regale more highs than lows. Suitably entertained and refreshed courtesy of sponsors Red Stripe, twenty-three strong all-girl choir Gaggle provide one of the most unique performances we've seen in many a year. Songs about men who cheat, liking cigarettes more than guitars and a beguiling interpretation of Marina & The Diamonds 'Mowgli's Road' are just three of the highlights in a set that culminates in a guy at the front of the stage pointing incessantly at the band before declaring loudly which members he would and wouldn't like to have sex with.

Pulled Apart By Horses meanwhile raise the roof as always with their chaotic, Seattle inspired punk rock, guitarist James Brown causing more damage to his already injured knee in the process. Having seen Surfer Blood tear up Camden Crawl a few weeks back with their west coast flavoured Pavement pop, they once again display a consistency beyond their tender years, 'Swim' in particular both elegantly swoonsome and anthemic in equal dispatches.

Next up are The Cribs and, maybe its just me, but their formulaic shouty ladrock is starting to become a little tiresome, despite having a living legend among their ranks these days. The next morning we pass them on the seafront, guitars in hand et al, on their way to an impromptu "gorilla gig" in one of Brighton's most intimate venues. Naturally, we decline the invitation to come and watch. Once is more than enough, ta.

French septet Coming Soon provide the Friday afternoon thrills, their quirky anti-folk that borders on twee 86 territory being both pleasantly surprising and soothing after the previous night's excesses. Ageing Dutch four-piece Bettie Serveert roll back the years with fervent aplomb in Volks. It's just a shame the venue's layout makes it impossible to see them, but what we hear gets an all-round thumbs up from us. Team Ghost meanwhile may feature at least one former member of M83 in their ranks but that's purely where the comparisons end. Their groove-laden noisepop contains random elements of krautrock, shoegaze and melody-driven folk and proves one of Contact's highlights of the weekend thus far.

Dropping by the Queens Hotel for a spot of Norwegian entertainment, Susanne Sundfor's Scandinavian Tori Amos impersonation is actually more riveting than it sounds. Onwards and upwards though, and despite early sound problems causing their set to be cut short by a good ten minutes, Dead Confederate are an explosive melee of Acid Rock and Stoner Metal with possibly the most excitable drummer this side of Keith Moon and Animal from The Muppet Show.

The Fiery Furnaces also prove to be something of a revelation, Eleanor Friedberger in particular giving Patti Smith and co. a run for their money in the cool stakes, while their predominantly 'Take Me Round Again' heavy set suggests they've rediscovered their creative spark too in the process. Having seen Wild Beasts more times than I care to mention this past twelve months, it's to their credit that I can honestly say they never fail to amaze. 'All The Kings Men', 'Brave Bulging Buoyant Clairvoyants' and 'We Still Got The Taste Dancing On Our Tongues' cause spasmodic outbreaks of dancing across the Pavillion's floor while set closer 'Empty Nest' is solemnly beautiful in its execution. One minor criticism? When are we going to hear some new material lads.?

With more mid-afternoon musical entertainment taking precedence over the FA Cup Final courtesy of The Chapman Family's intensely spiky power pop and Ou Est Le Swimming Pool's new rave for old men (cue a bloke in his fifties hogging the limelight by dancing like a drunk dad at a wedding ultimately proving more enjoyable than the band themselves), Contact is bracing itself for a memorable finale.

We don't have a long wait either as Wild Palms exceedingly drum heavy clatter is both impossible to ignore due to the ear-splitting sound levels and delightfully obtuse at the same time. There's elements of David Bowie, These New Puritans and Muse in there while guitarist Darrell Hawkins is surely a name to watch out for in the future, his distinctively elegiac patterns cutting through the haze like a chainsaw through plastic.

Poor old Here We Go Magic, one of the bands Contact has particularly been looking forward to, find their set dogged by PA and sound issues ultimately ensuing it gets cut short to a miserly four songs. A similar feat besets The Big Pink too, but not before they play one of the most startlingly impressive sets of the weekend. Amidst the more familiar material like 'Too Young To Love' and 'Velvet' they play what sounds like a new song, and Contact is getting increasingly sweaty in the middle of Digital's tiny dancefloor in the process.

With the queues elsewhere becoming longer with every passing minute, Contact decides to take a trip to Audio for the dance heavy sounds of Fenech-Soler and comes away decidedly impressed, if slightly disappointed that we couldn't get into Groove Armada all the same.

Overall, The Great Escape was an enjoyable experience that despite a decrease in ticket sales compared to the previous year will surely have done enough to sustain its prominent placing on the UK's festival calendar. Roll on 2011..!