Review of Funtimes Album by The Heartbreaks

To most, Morecambe is a forgotten seaside town which today only contains flickers and embers of its former glories, but, to jangle indie pop quartet The Heartbreaks, it's a way of life, an inspiration, their bread and butter. If ever there was a band that literally bleeds its environment, then it's The Heartbreaks. 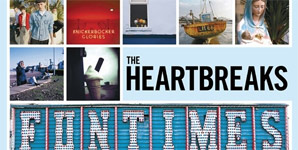 D'but album Funtimes arrives at a time when this kind of song writing and this kind of sound seem almost outlawed. Luckily, The Heartbreaks have been given a chance and after only a few listens of this sea salt soaked d'but, it's clearly a chance they've welcomed with open arms.

What's impressive about The Heartbreaks is their ability to be influenced by a number of iconic and distinctive artists from music past, without directly sounding like any of them. There is a combination of the energy of The Jam, the bemoaned romance of The Smiths and the pop sensibilities of Orange Juice. Chief songwriter Joseph Kondras writes self-deprecating lyrics that are both romantic and heart-breaking simultaneously; while there is a hint of Elvis Costello in singer Mathew Whitehouse' vocals, yet not enough to be tarnished as a pastiche, this winning formula is best showcased in the Edwin Collins produced Remorseful.

Ripples of Northern Soul can be heard on single Jealous, Don't You Know as it breaks from its pop fuelled confessional chorus to inspire a dance off with a funk tinged jam of a middle eight. But, essentially, their sound is personified by the jangle pop gem that is Delay Delay; its upbeat major chords juxtaposed by the lyrics 'I sit there as you bleed from wounds caused by others' - a delightful contrast.

Funtimes is an album played at almost breakneck speed; it conveys the energy of a young band brimming with energy but is also balanced with well written lyrics and a fine song writing craft. In a music industry of Polo towers, The Heartbreaks are a Midland hotel. A band truly worth believing in. The Heartbreaks - Hand On Heart Video