The Libertines Frontman Pete Doherty Reportedly Shocked A French Journalist By Halting An Interview To Take A Bathroom Break In The Corner Of His Dressing Room. 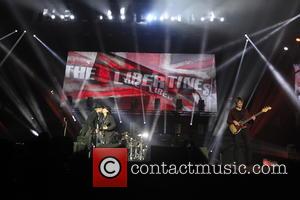 The Can't Stand Me Now hitmaker and his bandmate Carl Barat were chatting to reporter Emmanuel Marolle backstage at the Rock en Seine festival, where the group performed on 29 August (15), for French newspaper Le Parisien.

According to the interviewer, Doherty stopped the chat and asked, "Excuse me, can I go to the toilet?"

However, rather than walking off to find the nearest bathroom, Doherty urinated on the floor in front of the shocked reporter, who writes, "Doherty gets up, goes into a corner of the dressing room... and relieves his bladder on the ground, on the wooden floor."

Marolle reports Barat then attempted to spare his friend's blushes by explaining, "In England, they say the French have the right to do that in the street."

She reports that after emptying his bladder, Doherty then zipped up his trousers, sat down, grabbed a drink and continued with the interview.