British Rockers The Libertines Surprised Revellers At A Restaurant/bar In London On Tuesday Night (28jul15) By Playing A Two-hour Set. 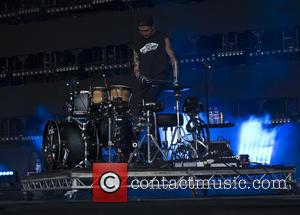 The group, fronted by Pete Doherty and Carl Barat, gave no early warning to fans of their performance and turned up unannounced to take over a show by rock band The Holy Ghosts at the Blues Kitchen in Camden, north London.

The Holy Ghosts shared a picture on Twitter.com and wrote, "These mugs (idiots) crashed our show at @TheBluesKitchen tonight" and a representative for the venue added, "Didn't think we'd be saying this today. The @libertines have just hit the stage in #Camden. Get down."

The Libertines performed a two-hour set to a small crowd of around 250 people, playing songs from upcoming album Anthems for Doomed Youth plus covers of tracks by Amy Winehouse, The Clash and The Strokes.

Barat also crowdsurfed from the stage to the bar to pick up a bottle of rum and the band members stage dived into the audience, according to NME.com. The show was brought to a close when the crowd invaded the stage en masse around midnight.