The Machine Room - Love from a Distance EP Review

Review of Love from a Distance EP by The Machine Room

Creating melancholy, haunting and eerie synth music seems to be the popular ambition these days. Or at least, definitely the goal of indie project The Machine Room, an Edinburgh based band, self-styled as a salute to popular group The Smiths. Their debut EP, Love from a Distance, is a spine tingling, ghostly collection of synths and echoing vocals designed to get the hairs on the back of your neck standing and the inside of your head pulsing. 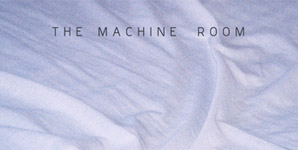 Love from a Distance, is described by the band themselves as the sort of music, "you'll stick on (loudly) at the end of a night of heavy drinking." Presumably, to wind oneself down then, because there's nothing particularly upbeat about any of the songs and definitely nothing on there that one would find at a traditional 'night of heavy drinking', anyway. It sounds like it's been recorded inside St. Paul's Cathedral, the sound is so large. Almost everything is echoed and pulsed back into the ears of the listener, occasionally weighing down on the brain unpleasantly.

That isn't to say that the album isn't good. It is. In fact one finds oneself singing along, despite the fact that once it's been turned off, there's no way that a listener will remember the lyrics. It's like the music is creating a marked impression on the listener, but only whilst it's on, and then once it's gone, they can't remember a single thing about it except that it was a tad slow and depressing. Or maybe just thoughtful. And soon even that goes, and it has to go on again, just to refresh the memory. This makes the album really, really interesting to listen to, despite the fact that it must be concentrated on. The only problem is that it's also really hard to concentrate on without zoning out and relaxing completely.

So, if one isn't trying to analyse it and wants trance-inducing background music, this is definitely a good choice. It's slow, melodic and mellow, but with cheerful and expressive lyrics. Vocally, it's still spine chilling and eerie, but at the same time not unpleasant. Musically, again it sounds like it was recorded in a huge underground cavern with the microphone sellotaped to the ceiling, but this in context of The Machine Room's target sound it works really well.

Overall, then, this album is excellent for having as a background soundtrack to a relaxation session, or as an in depth challenge at musical analysis. So, for that reason, it should be really quite appealing to a lot of people. The only issue is that if one doesn't like melancholy, moody electronic synth music, this won't appeal. 7.5/10.

The Machine Room - Love from a Distance