Review of Oh my days Album by The Memory Band

The memory band, a little known British Folk act that seem more like a collective, they boast more members than the Arcade Fire, and could easily form a football team with their 10 strong musical army should they desire a change in career.

Oh my days (sounds a bit like a Black Eyed Peas title doesn't it?) is their third album to date, their first album a self titled debut was released in 2004, but this is a very different affair from that mid Naughties effort. Vocals become scarce on an album littered with atmospheric instrumentals throughout. In fact the album begins and ends with them, opening track Crow being the pick of the bunch. However things couldn't change quickly enough, the gentle patters of the Crow's pianos are soon flooded with the bluesy energy of A New Skin. Equipped with a passionate soulful vocal, the track signifies a band with more strings to its bow than folk by numbers.

The uplifting Apples is a breath of fresh air and juxtaposes some of the darker tracks on the album. It becomes apparent as the album progresses that the bands strong point in terms of song writing emerges in the more uplifting tracks. Run River run is another example of this, perhaps one of the albums weakness's is the lack of positive sounds it creates. That isn't to say The Memory Band cannot pull off a brooding and dark sound, in fact it's executed with aplomb on one of the albums stand out tracks Demon Days, a drum heavy ramble that has a Paulo Nutini style vocal. 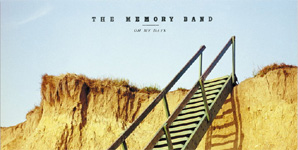 Oh my days has flashes of success, it does so with the progressive motivated sounds of Demon Days, Apples and A New Skin, however too often the album's progress is halted by some instrumentals that seem to lack invention.

The Memory Band - Oh my days