The Milk, Tales From The Thames Delta Album Review 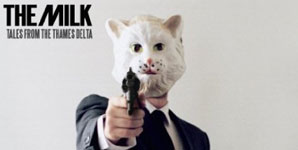 The Milk. One band from Essex comprising four men with a single, focussed vision. To put the spirit of Soul and R&B back into today's music. With their frankly brilliant debut release Tales From The Thames Delta, The Milk have done exactly that.

The album opens strongly with a trio of well-crafted songs in the popular Broke Up The Family, Hometown and first single (All I Wanted Was) Danger. Each with their own moments of brilliance, whether it's the charged intro to ...Family or the fuzzy outro to Hometown, they really set the standard high for the rest of the record. Mr Motivator is on another level again, channelling Ska and Reggae energy into a punchy four-minute number that was originally touted to be the album opener.

Later on the album exposes Tales From The Thames Delta's dark side, with Picking Up The Pieces and Every Time We Fight offering some shade to the records otherwise up-tempo, light feel. The former is possibly the album's strongest track and a recently released video saw (now Hollywood) actor Idris Elba providing a guest appearance. While his rapping skills don't quite match his prowess in front of a camera, the fact that he's there at all concretes the notion that The Milk are only looking up.

The album's final tracks offer stark contrast to one another. Latest single Chip The Kids offering another three minutes of upbeat nostalgia before the fantastically heartfelt Lay The Pain On Me draws the album to a close. The band wanted Lay The Pain On Me to sound as it did on its inception, with all four members singing while gathered around a piano. Fortunately, it does just that, proving that sometimes the best really is left until last. Despite the level of nostalgia in The Milk's sound, the inclusion of electronic elements provides another unexpected highlight. Often employed to segue between tracks, even these bizarre patches are catchy and add a fresh twist to the classic feel of the record.

It's important to keep in mind that Tales from the Thames Delta is The Milk's first release. Where debut albums often appear a little mismatched and lacking a strong sense of direction, Tales of the Thames Delta is a consistent and accomplished release with a maturity normally associated with artists well into their recording career. However, one major questions remains. How will these exceptional songs be translated live? The live recordings released suggest it is likely to be a rawer experience than on record, something that can only be good. Watch out ladies and gentlemen, The Milk are coming.