Review of Big Echo Album by The Morning Benders

Big Echo is the second album from California four piece The Morning Benders and shows the now New York based band move their sound to the next level, kicking on from where their debut album left them in 2008. 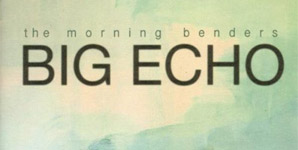 The dream like Excuses floats in like one of the waves featured on the albums artwork, a mixture of soothing acoustic guitars and dreamy MGMT like vocals, it sounds like a vintage 60s record recorded using analogue. A perfect way to introduce an album. Promises however is a far more bluesy effort, featuring riffs that bulge with attitude, it's more of a groove than Excuses but it has the same pleasing effect as it rumbles to a euphoric close.

The California 4 piece show their roots in the shape of the Beach Boys sounding Wet Cement, a transient song that stays in gear one throughout and yet doesn't stop being absorbing all the same. Again featuring some beautifully soft vocals, its one of many of its ilk on Big Echo.

The pace is picked up on Cold War and it's to the albums benefit as The Morning Benders show their variation. A funkier effort that anything else on the album, it again stays within the 60s styling's of other album tracks yet adds some more bite, its only downfall is its 1:40 length.

The funky styling's of Cold War are maintained in the shape of All Day Day Light, heavy bass lines define a track that represents the most rock roll track on the album. Its Contrast quickly clashes against the proceeding Verve like Stitches, a sombre affair that features some impressive guitar playing while being in debt to some imaginative production as it hides behind an Phil Spector like wall of sound. It's an atmospheric track that highlights the bands maturity and acts as a perfect example of the bands development since debut album Talking Through Tin Cans.

As the album fades out in the shape of Sleeping In, you can't help be feel impressed with the album as a package, the production gives well written songs a perfect pedestal to perform from, allowing the band to be adventurous in their musicianship and sees them flourish in the process. Something tells me there's more to come from The Morning Benders.