Any fans expecting a return to The Ordinary Boys' earlier sound will be surprised by the vast departure served up at times on this self-titled album. Gone are the quintessentially English sounds of 'Over The Counter Culture', the Two Tone/Ska of 'Brassbound' or even the heavily produced pop of 2008's 'How To Get Everything Ever Wanted In 10 Easy Steps', and in their place is a sound that leans far more on the likes of Weezer and Teenage Fanclub. 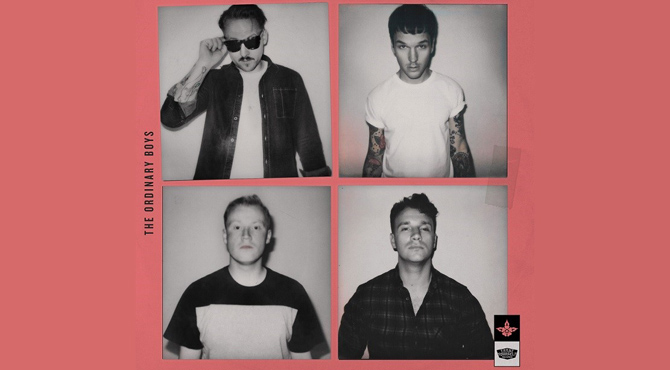 The reason for the change in sound could be a number of factors, but the departure of previous guitarist and co-writer William Brown coupled with the addition of former Spectrals man Louis Jones, means that the new direction in many respects was unavoidable rather than intentional. Jones' sharing the vocals on many of the album's tracks adds a new dimension to the band and really hammers home this change of direction as well as the notion that this is a fresh start for the band after a lengthy hiatus. The Preston/Jones vocal combination is one that blends together effortlessly on numerous occasions, but never to a greater degree than on confident album opener 'All About Tonight'. 'Looking back I never saw it coming', confesses Jones, and he's not alone in that respect, as Spectrals pop hooks instantly gel with The Ordinary Boys to triumphant effect.

What follows this charming introduction is a run of energetic pace setters in 'Awkward', 'Four Letter Word' and 'I'm Leaving You (And I'm Taking You With Me)', all carrying the carefree energy of début album 'Over The Counter Culture' in their stride. The style is only punctured by the incredibly infectious 'Panic Attack', which almost feels like a deliberate nod to The Ramones' 'Rockaway Beach', and the vibrantly positive 'Do or Die', which coupled together, form a solid midway point.

Aside from style and personnel changes, what's most notable about The Ordinary Boys is its unrelenting pace. There really is no holding back as it ruthlessly rips straight through, only reluctantly stopping to exhale on the contagious 50s tinged 'Almost Ready' and album closer and highlight 'Disposable Anthem'. It's the kind of riff heavy, breakneck paced record you would expect from a newly signed band of 19/20 year olds rather than a band who released their debut album in 2004.

Ultimately, what gives The Ordinary Boys such a fresh feel is its lack of what are usually regarded as traditional 'album tracks', and as a consequence, what is left is a collection of finely constructed pop punk anthems begging to be played live and loud.

The Ordinary Boys - Boys will be boys

The Ordinary Boys - with support from The Kaiser Chiefs