Posted in Press Releases on 05 February 2014 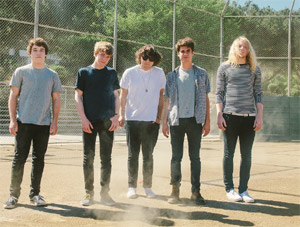 The Orwells release their new single, The Righteous One, through Canvasback/Atlantic Records on 24th March. It is taken from their forthcoming new album, due for release in the early Summer.

Following hot on the heels of their Radio 1 playlisted first-single-proper Dirty Sheets, Chicago's The Orwells deliver another fizzing, frenzied example of why they are so deserving of the attention they've garnered over the past eight months on both sides of the Atlantic.

The Righteous One is the sound of this young band at their most riotous. A staple in their verge-of-collapse live sets, it's a dark, furious, melody-fuelled indie-rock song that nods to the urgency and propulsion of The Stooges, but concludes in a sound very much of their own.

Produced in London by Jim Abbiss in Autumn 2013, The Righteous One is another heady example of what the band's full-length record stands to promise.

Having commenced this year with one of the most spectacularly debauched television performances on The Late Show with David Letterman, the band head out on a US tour in support of The Arctic Monkeys this month, jump aboard the Weezer Cruise in mid-February, and conclude February with a UK headline tour. The run of British dates includes two sold-out London shows at the legendary 100 Club and Dalston Trinity Centre.

Listen to 'The Righteous One' here: