The Pack A.D. - comprised of guitarist/vocalist Becky Black and drummer Maya Miller - are back with their fifth album (and their first on Nettwerk Productions) 'Do Not Engage'. 'Airborne' opens the album with a pounding, repetitive and memorable drum beat tied together with a shaky guitar pattern that jitters in and out of the 4/4 timing. 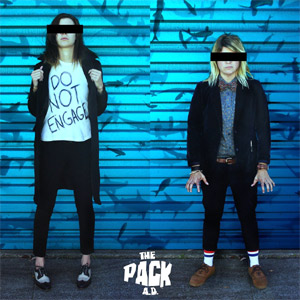 Black's dreamlike moody vocals are what stand out immediately. Since The Pack A.D's first album 'Tintype', we've heard a maturity steadily developing in BB's voice and it now appears to be at a pinnacle. Second song 'Big Shot' stomps out its melody and is much less tender. Again, the vocals stand out greatly, only this time they have more attitude and a sense of anger to them. 'Animal' is very bold with low guitar notes that slide back and forth, and there's an attempt to be sexy with the crooning of "You oo oo, you animal" in the chorus. 'Creeping Jenny' is also a fun listen with its bouncing riff and roaring vocals.

The earlier tracks on the album show something that set The Pack A.D. apart from many other 21st century blues rock acts, yet as the album moves on there's a distinct lack of originality. From this point, the album takes on a more generic tone; 'Battering Ram' and 'Stalking Is Normal' aren't overly catchy, however the fuzz and husky vocals at least offer the listener something that reminds them that they're still listening to The Pack A.D.

Continue reading: The Pack A.D. - Do Not Engage Album Review