Over the course his illustrious career, dub reggae experimentalist Scientist has won the world cup, saved the world from vampires, encountered Pac-man, taken dub into another dimension, fought space invaders, and become the heavyweight dub champion. What's more he's always found time to record a concept album commemorating the occasion, complete with pleasingly ridiculous cartoonish cover-art. In the circumstances, he probably regards blasting dubstep into outer space as a bit of light relief. Regardless, there can be no doubt that Tectonic label head Pinch has put a lot of hard work into this remix project: he's assembled an impressive cast of big-name dubstep producers, all of whom have submitted previously unreleased tracks. The first disc collects the original versions of these songs; the second disc consists of Scientist's dubby reworkings. Each CD is good enough by itself to justify the existence of this release. Together, they make it an essential purchase. 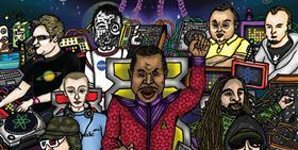