Sweden is synonymous with many different things. Over the years it has given the world Ikea, Volvos and sumptuous music. This has been reflected through the years by bands such as ABBA (obviously) and the likes of The Cardigans, who managed to break into shores away from their homeland. The Soundtrack Of Our Lives has been one of the most recent of Scandinavian bands whose impressive body of work has reverberated round the world to those who appreciate quality music. If ever you were in doubt to listen to this band, watch their performance of Sister Surround on Later with Jools Holland from 2002. 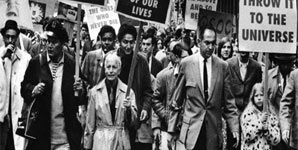 After more than 15 years together TSOOL have now reached the end and are bowing out of the game with seventh album, Throw It To The Universe. They have already had two self imposed exiles in the past but it is said that the third will be permanent. The band's charismatic front man and mainstay, Ebbot Lundberg, has been quoted saying he thinks it is the band's best album yet and a chance to bow out in style.

Throw It To The Universe begins with the title track and that TSOOL sound is present right of the bat. Lundberg's vocals and the band's musical ability allow the listener to float along on a bed of air with nothing but undiluted talent coming out of the stereo speakers. And after the sort of career and critical acclaim lauded on the six piece there has never been a truer line sung than when Lundberg sings "We are the soundtrack of your life."

Track four, Where's The Rock?, is probably the closest Sweden will get to having their own Mariachi band, but TSOOL throw themselves into the song with plenty of gusto to spare.

Although it could be argued TSOOL's level of success sales wise did not match the level of critical acclaim (not many bands combine both anyway) Throw It To The Universe is a particularly strong album to split up on. Although they have produced stronger material in the past, other bands can only dream to produce work like this in their peak never mind when it is possibly a group's last ever output together. Lundberg was quoted in saying that this album completes the band's journey, and what a journey it has been for their fans and just anyone who appreciates quality well written music.

They will be remembered fondly.

The Soundtrack of Our Lives - Throw It To The Universe