Review of Angles Album by The Strokes

We're little over thirty-five minutes into 'Angles' when Julian Casablancas urges the battle cry 'Don't try to stop us, get out of the way!' A matter of seconds later, The Strokes first record in over five years is over. 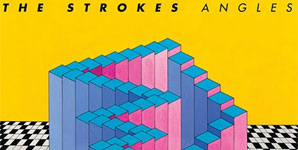 Never ones to outstay their welcome, the story of The Strokes can be summed up in many different ways depending which side of the fence you wish to sit on. Heralded as the saviours of guitar music and widely purported to have made the best debut album of the decade by certain commentators, those of a more cynical nature would put their unparalleled success down to simply being in the right place at the right time. Certainly anyone wishing to remember as far back as the summer of 2001 would struggle to get away from the fact it was a bleak period for music indeed, far worse than the present if truth be known. The alternative and independent scenes were awash with an unpalatable mix of nu metal and acoustic muso bores led by the likes of Limp Bizkit and Travis, so to call the arrival of five unkempt yet remarkably good looking New Yorkers playing edgily radio friendly punk a breath of fresh air would be an understatement of vast proportions.

In all honesty, this scribe didn't care that much for 'Is This It' at the time and listening to the record in 2011 its fair to say it hasn't aged particularly well. Nevertheless, its existence undoubtedly created a sea change both in the way bands previously brought up on a diet of bad metal altered their game plans completely causing the music industry's A&R fraternity to widen their search in terms of demographic and aesthetic for the post-millennial guitar-wielding breed. If anything, their two subsequent long players 'Room On Fire' and 'First Impressions Of Earth' highlighted a band itching to develop and experiment, even if both critical and commercial nonchalance suggested their fanbase thought otherwise.

Here then, with their fourth album finally complete, it's been something of a long-winded process for a record guitarist Albert Hammond Junior describes as 'like we were starting from scratch'. However inactive as a band The Strokes may have been, the interim period between 'First Impressions.' and 'Angles' has seen Hammond, Casablancas, bassist Nikolai Fraiture and drummer Fabrizio Moretti release a total of five albums between them, while fellow guitarist Nick Valensi's contributions can be heard on various projects ranging from Devendra Banhart's 'Smokey Rolls Down' to Moretti's own Little Joy creation besides.

The clue to what made them get back together and record 'Angles' unabashedly lies in the title. A reference to the five different people that contributed to the album, 'Angles' is a record that seems to encompass all three of its predecessors and the ensuing solo projects of its creators. It can also list a couple of firsts among its credits, namely the way all four members contribute backing vocals to Casablancas' unmistakeable drawl on almost every one of its ten tracks, but more importantly 'Angles' is the only Strokes record to date not to feature Gordon Raphael on production duties. Having acquired the veterans tag on account of a recording career spanning over a decade, the band themselves decided to produce nine of the songs in Hammond's New York studio, closer 'Life Is Simple In The Moonlight' being the only survivor from the initial recording sessions with Joe Chiccarelli last year.

What we have in total can best be described as something of a mixed bag. As with all their previous albums, 'Angles' gets off to a dazzling start. 'Machu Picchu', penned by Casablancas and Valensi, follows on from both 'First Impressions Of Earth' and the singer's solo effort of 2009 'Phrazes For The Young''s dalliances with electronics, taking its key from Blondie's more ambivalent disco years at the outset. While Casablancas vocals sound heavily distorted, possibly with the aid of a more sophisticated variation on autotune, it's an undeniably quirky, hugely infectious opener easily on a par with 'You Only Live Once' as possibly their best opening gambit to a record.

Both 'Under Cover Of Darkness' and 'Two Kinds Of Happiness' return to a more old school Strokes disciples of 'Is This It' would be more familiar with. Where the former's main salvation lies in the fervent guitar duets of Valensi and Hammond, the latter takes a countrified path similar to the one Tom Petty embarked on during his 'Full Moon Fever' heyday. 'Taken For A Fool' also sounds like it could have been created during the earlier part of their career, Casablancas imploring, 'Don't you forget my number' over a blues-tinged melody that wouldn't sound out of place alongside 'Last Nite' et al, if not quite reaching the same levels of fervour.

Elsewhere, its easy to see why the band were so keen to emphasise the fact 'Angles' was a record where no one individual stood out from the crowd. 'You're So Right' demonstrates this fact in so many ways, most notably due to it sounding as if all five may have been playing along to a diverse collection of individual soundtracks ranging from Radiohead's 'Hail To The Thief' to The Saints 'I'm Stranded' without managing to forge any real identity. Lyrically suspicious, the line 'I don't want to fight any more' quite easily could have been inspired by its rudderless conclusion. Likewise the more laidback 'Games' and forgettable 'Call Me Back', the former sounding like an outtake left over from 2005's sessions for 'First Impressions Of Earth' while the latter apes Texas sextet The Strange Boys, a band whose detractors arguably point out have made a career out of resembling a Strokes tribute act themselves.

The gritty Thin Lizzy-esque 'Gratisfaction' and enthralling prog-rock of 'Metabolism' both drag 'Angles' out of the mire kicking and screaming just when it seems like it was about to disappear in a quagmire of its own hype. Each leading candidates for future single status while again highlighting The Strokes panache for providing unexpected twists at the least obvious moments. What's more, Casablancas even makes his own stab at being Matt Bellamy for the coda of 'Metabolism', eventually falling short on his vocal range.

A welcome return then in places, but overall 'Angles' isn't the record the band's legion of devotees would have been hoping for. Nevertheless, it's a brave and diverse attempt after so long away, and with the band already stating their intentions for the follow-up, maybe the wait for album number five won't be such a tenuous one after all.