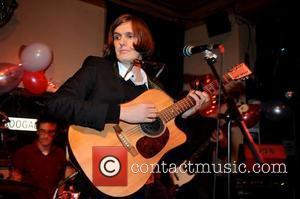 Picture: Nikolai Fraiture of the Strokes performing with his side project Nickel Eye at the Boogaloo club in Highgate London, England - 14.10.08

The Strokes star Julian Casablancas gave security guards a headache during his set at T In The Park festival on Saturday (10Jul10) - by jumping off stage and running among fans.
The rocker performed a mix of solo songs and band tracks during his slot at the annual Scottish music event.
He spotted an inflatable Spiderman doll on the area in front of the stage and jumped down to retrieve it, sending the crowd into a frenzy.
He then proceeded to sing Out Of The Blue while being grabbed by fans in the front row before running the entire length of the barrier and hugging the crowd, according to NME.com.
Casablancas told the appreciative audience, "I hope you've enjoyed spending your time with us."